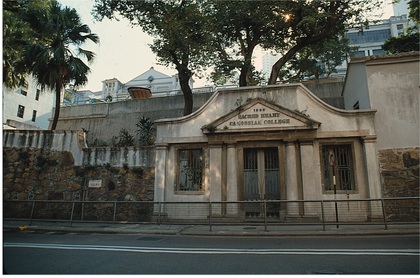 The Canossian Daughters of Charity is a Roman Catholic religious order founded by Marchioness Magdalene, now St. Magdalene of Canossa, from the House of Canossa in Verona, Italy.

​Soon after the first Canossian Sisters arrived from Italy in 1860, they established a school for girls.  This Italian Convent School, with 40 students being taught Chinese, English and Portuguese, was the beginning of the present Sacred Heart Canossian College.  The first headmistress of the school was Sister Aloysia Emily Bowring (1860 - 1870)[1], daughter of the fourth governor of Hong Kong, Sir John Bowring.

From "Italian Convent School', it later changed its name to Sacred Heart School, after the Sacred Heart of Jesus.  In 1960, the school was officially registered as Sacred Heart Canossian College.

​The three major aspects of Canossian education are Integrity (sound in moral and religious values), Versatility (open to growth) and Charity in Humility (loving and caring and willing to serve others).   Over the years, there have been many alumni coming to Canada for education and immigration purposes. As the number of alumni continued to grow and to concretise these goals of the Canossian education, a network system was formed.

​We:We would like to invite our teachers, school staff, and alumni to join us and to help us in promoting and enriching the activities of this Association. Please feel free to contact the association.